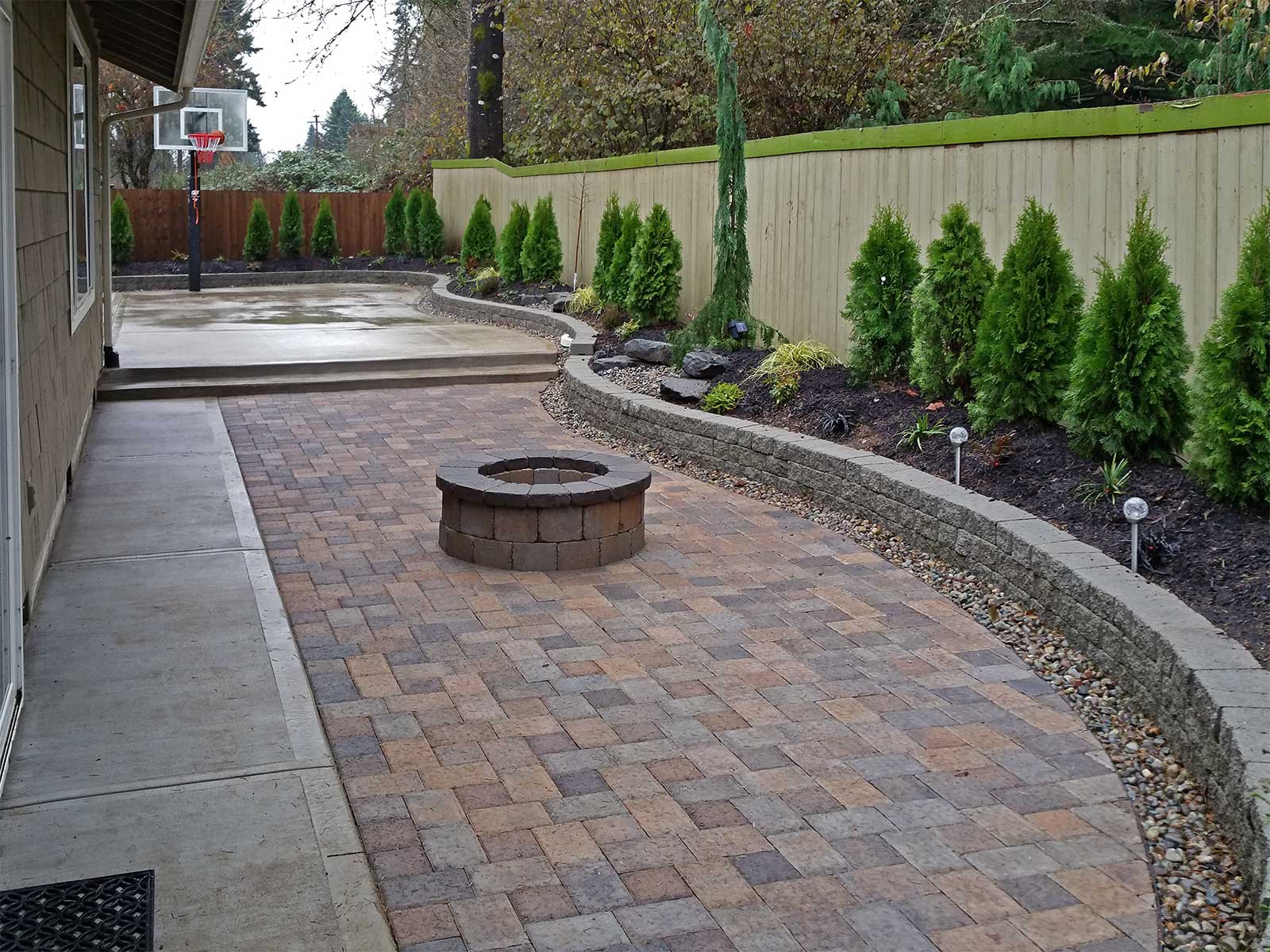 Backyard paver patio connected to a concrete slab basketball court. Point to the photo to see the backyard before the transformation.

Sam and Kristin Costello were looking for ways to make their backyard more functional.  Their parcel in Southeast Olympia has an odd shape, and in particular has a small, narrow backyard.  The concrete slab was too narrow to even put out patio furniture, and there was no security for their dog.

The Costellos had been investigating ways to make their small backyard more useful for nearly three years.  They knew they wanted a backyard patio for entertaining, a kennel to keep their dog safe, and a basketball court.  They also wanted a solution that was low maintenance.  But after talking with numerous contractors, they still weren't satisfied with any of the bids they had received.

Then a friend suggested they contact Aaron Borden at AJB Landscaping & Fence.  It turns out that Sam had known Aaron since middle school.  After meeting with Aaron and reviewing his suggestions, they knew they had finally found the right company for the job.

We started by excavating nearly 25 cubic yards of dirt, allowing us to regrade the area that would become the basketball court.  We then poured the concrete for the basketball court and created steps leading down to the backyard.  We removed the original patio and replaced it with a wider concrete sidewalk.  We then installed a paver patio with a built-in, matching fire pit.  To add depth and separation of space, we built a short retaining wall around the entire patio and basketball court to create raised landscaping beds, and then planted low maintenance small plants and evergreen shrubs with a drip line irrigation system.

Behind the patio, we created a safe area for the Costello's dogs.  The area is enclosed by a see-thru, kennel fence and covered with cedar wood chips.  Cedar is ideal bedding for a kennel area because it masks odors and does not give dogs splinters.  This is same material used in children's playgrounds. We also installed steel fencing underneath the chips to prevent the dogs from digging and creating a mess.

Sam and Kristin were so pleased with the results that they decided to hire us to update their front yard as well.  Because they didn't have a built-in irrigation system, they had let their front lawn go dormant for a number of summers.  We completely removed the old lawn, installed an underground sprinkler system and additional drip lines, rebuilt the landscaping beds, and then installed fresh sod, shrubbery and foliage.

The Costellos couldn't be happier with the results, and they were particularly pleased with the professionalism, efficiency and accommodating nature of our crew.  They were totally at ease with our crew: "Aaron is great, really easy to work with, very accommodating, and listens to what you want," Kristin told us.  "They were efficient and affordable. I would recommend them without reservation."

The project was such a success that even the neighbors took notice.  In fact, we will be redoing their landscaping next spring!

Update, July 2015: This month we also added an ornamental iron gate to the Costello's front fence. You can see pictures of that small project here.

Click on the thumbnails to see the images. You can scroll through the images by pressing the left and right arrows on your keyboard, or by swiping your screen left and right.