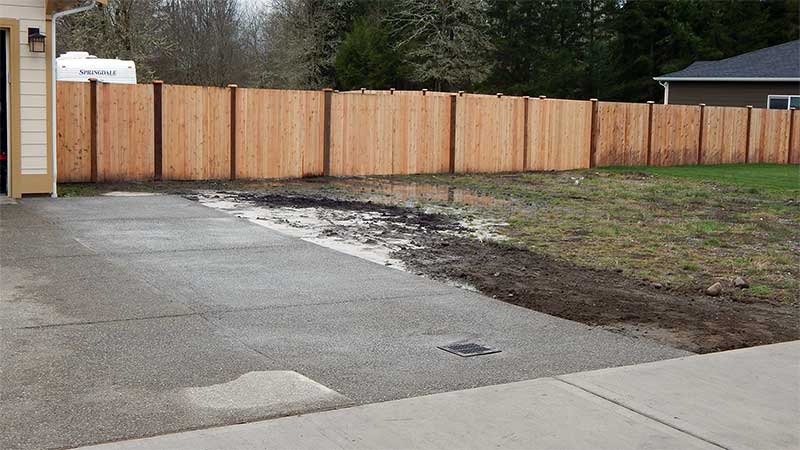 The exposed aggregate driveway extension matches the look and texture of the original driveway. It will darken as it cures and be virtually indistinguishable. Point to the image to see how it looked during construction.

The Mackensie family in Roy, Washington (eastern Pierce County) needed some additional driveway space for a third vehicle. AJB Landscaping & Fence had already built them a new cedar fence (visible in the pictures), so they came back to us for this concrete project.

The original driveway was built with exposed aggregate concrete, so the Mackensies wanted the new driveway extension to match as closely as possible. In addition, the front yard had some drainage issues, so we needed to build in a drainage system to prevent water from collecting on the driveway.

For those of you not familiar, exposed aggregate concrete is created by mixing pebbles, small river rocks, or other materials into the concrete. Once the concrete is poured, we slow the drying process of the surface of concrete by spraying on a retardant – in this case, a mixture of sugar and water. This allows the base to set while keeping the surface malleable. We then carefully remove the concrete paste from the top layer by using metal brushes and carefully spraying it off with water. This exposes the aggregate material while still keeping it secured in the cement.

Exposed aggregate not only adds character to concrete, but also adds traction. In a wet climate like we have in Pierce and Thurston counties, concrete tends to get slippery in the winter months. The exposed aggregate adds grip, in effect providing a non-skid surface.

Click on the thumbnails to see the images. You can scroll through the images by pressing the left and right arrows on your keyboard, or by swiping your screen left and right.